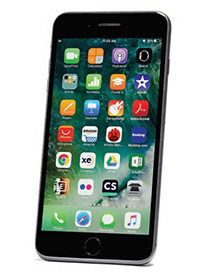 Ergonomics
The iPhone 7 Plus is slightly oversized for an average-sized hand, but the large profile with a bright and crisp display will more than make up for the inconvenience. The phone has a tendency to slip and back is prone to scratches. Hence a case is recommended. The device has a redesigned advanced solid-state Home button that is pressure-sensitive. The new taptic engine that lies below provides such tactile feedback that lets you experience a real sense of pressing the button, though it is not a mechanical device. The Home button embeds an advanced fingerprint sensor that lets you quickly unlock the phone. The power button and volume rocker are at predictable spots on the side. The left side has the additional shortcut button for silent mode.

Performance
The iPhone 7 Plus, as expected, performed very well. The display, speed and processing were flawless. The sound quality exceeded all our expectations. We have seen reports of headphones connected through the included adapter to the Lightning port reproducing inferior sound. But contrary to this, our experience was quite the opposite, probably because we were using one of the high-end Sennheiser headphones. Videos were smooth and seamless. Switching from my Android device to the iPhone was surprisingly easy with the devicerecommended third party app.

At first, we were not very impressed with the camera output, but a few updates later, the images exhibited a marked improvement. However, once the images were transferred to a computer and viewed on a large screen, we were not too impressed, especially having witnessed vast imaging improvements in some Android phones. Native images, viewed at 25 percent, remained noise-free up to ISO 200. ISO 400 and 800 were quite noisy. Viewed at 50 percent, the images were usable up to ISO 100, but all images were noisy. The device did not produce any colour cast.

We never experienced any overheating or lag with the phone. The battery lasted for a day on moderate use, which is good by iPhone standards. If we need to pick on the negative, it has to be the fingerprint unlock failing at the slightest hint of moisture or oil on your finger.

Value for Money
The 32GB model of the iPhone 7 Plus retails at an MRP of Rs.72,000 while the 128GB version carries a price tag of Rs.82,000. The 256GB top-end variant is priced at Rs.92,000. While these prices are incomparable to Android devices, Apple caters to a different segment of customers who are dedicated to their iPhones. So we would consider it competitive. |SP

MINUS
• Lack of innovation in camera
• Back prone to scratches

VERDICT
As already mentioned, iPhone has a dedicated customer following and hence it does not have real competitors in that sense. However, we are duty-bound to give a verdict, and here it is. The iPhone 7 Plus packs quite a punch in processing power and the battery life is also quite good, thanks to the excellent optimisation features. However, the camera leaves much to be desired, if you consider the imaging innovations in Android devices.