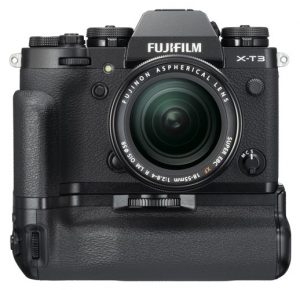 The X-T3 does not feature an optical low-pass filter and uses the unique colour filter array of X-Trans CMOS sensors to control moiré and false colours. The sensor has phase detection pixels distributed across the surface to improve image resolution without compromising signal to noise ratio. With this camera, ISO160 is now part of the standard ISO range.

Face Detection AF has also been improved. Eye Detection AF now supports the AF-C mode to maintain accurate focus tracking. Face and Eye Detection AF is also available during video recording to achieve smooth filming of subjects. The 3.69-million-dot high resolution EVF offers a magnification ratio of 0.75x. The X-T3 also allows continuous shooting of 11 fps with the mechanical shutter without the optional vertical battery grip. Additional enhancements to the X-T3 include a display time lag of just 0.005 seconds and a EVF refresh rate of 100fps for smooth display of moving subject or when panning the camera. A new sports finder mode for enhanced capture of moving subjects is especially useful for sports and wildlife photography, and a new pre-shoot function, which allows photographers to start shooting as soon as the shutter button is half-pressed to ensure the moment is never missed.

The X-T3 is the first mirrorless digital camera capable of internal SD card 4K/60P 4:2:0 10bit recording and the first mirrorless digital camera with APS-C or larger sensor that is capable of 4K/60P 4:2:2 10bit HDMI output. Supported video formats include the widely-used H.264/MPEG-4 AVC as well as H.265/HEVC for greater data compression, which enables internal recording of 4K/60P 4:2:0 10bit at200Mbps bitrate as well as simultaneous HDMI output.

The Vertical Battery Grip VG-XT3 is designed to be dust-resistant, weather-resistant and capable of operating at temperatures as low as -10°C/14° F, and holds two additional batteries to increase the maximum number of shots to 1,100 (in normal mode). The grip features a shutter release button, focus lever, AE-L button, AF-L button, front and rear command dials, Q button and Fn button.

The MHG-XT3 Metal Hand Grip makes it substantially more comfortable to hold the camera when it is mounted with a large-aperture lens, in order to reduce camera shake. The battery or SD cards can be replaced without having to remove the hand grip, and the base can be used as a quick release shoe when using a dovetail mount on a tripod.