Rajasthan has witnessed ‘Rajas’ and ‘Maharajahs’ who left their marks in the history of India –majestic hill forts and exquisite palaces, with magnificent cultures, each one of them narrating the legends of its kings and kingdom. Rajasthan gives us good reasons for exploring the beautiful structures and stunning architecture which are beyond comparison. 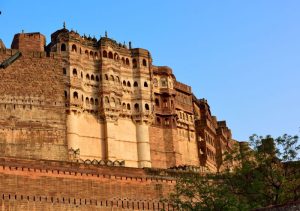 MEHRANGARH FORT – the largest fort in India
Mehrangarh Fort is the pride of Jodhpur, Rajasthan, because of its splendid architecture and diverse history. The fort, spread over an area of approximately five square kilometres, is considered to be one of the largest forts in India. It preserves the country’s rich history and also depicts the royal life of the ‘Rathores’ of Rajasthan. Mehrangarh Fort has seven entry gates. These gates were built by different rulers, as a mark of honour immortalising their victories over the armies of Bikaner and Jaipur. Overlooking the fort, one can see a panoramic view of Jodhpur city which esembles a blue carpet. Within the fort are several magnificent palaces – the main palaces are Moti Mahal, Phool Mahal, Sheesh Mahal, Zenana Dude, Takht Vilas and Jhanki Mahal. There are also two temples located inside the fort – Chamundi Devi Mandir and Nagnechiaji
Mandir, dedicated to Goddess Durga and Kuldevi, respectively.
A museum within the Mehrangarh fort exhibits a rich collection of palanquins, musical instruments, royal cradles, costumes, arms, furniture and paintings of the bygone era. Gangaur and Dussehra are the traditional festivals celebrated annually at Mehrangarh Fort . 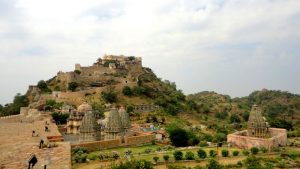 KUMBHALGARH FORT – the Palace of Clouds
Kumbhalgarh Fort in Rajasthan, located at a distance of 64 kms from Udaipur in the Rajasmand district, is considered as the second most important fort after Chittorgarh. Encircled by 13 elevated mountain peaks, the fort is constructed on the topmost ridges, around 1,914 metres above sea level. The fort’s massive wall stretches some 36 kms with a width enough to take eight horses abreast. The huge complex of the fort has numerous palaces, temples and gardens, enhancing the grandeur of the fort. A few kilometres before you reach Kumbhalgarh Fort, you will find yourself on a zigzag road passing through deep ravines and thick forests. You will pass through several gates (known as Pols) having huge watch towers – Arait Pol, Hulla Pol, Hanuman Pol, Ram Pol, Bhairava Pol, Paghra Pol, Topkhana Pol and Nimboo Pol. The walls of the fort are very broad – eight horses can stand side by side. There are over 360 temples inside the fort complex. The fort is also known for its ‘Badal Mahal’ (palace in the clouds). It is also the birthplace of the great warrior Maharana Pratap. The palace has beautiful rooms with lovely colour combinations of green, turquoise and white, presenting a bright contrast to the earthy colours of the fort. The Badal Mahal also offers a fantastic panoramic view of downtown. The fort is declared as a UNESCO World Heritage Site.

AMBER PALACE FORT –a Beautiful Blend of Architecture
One of the top tourist attractions of Jaipur – the Amber Palace (also known as Amber Fort, Amer Palace and AmerFort) – sits atop a small hill located at a distance approximately 11 km from the main city. The fort is divided into four main sections that are graced with their own courtyards. The second courtyard is famous for its Diwan-i-Aam (public audience hall), Sheesh Mahal and the Sukh Mahal. An important attraction here is the Magic Flower, a fresco carved out of marble. It was built in red stone and marble. The fresco and the Maotha lake add a certain charm to the entire fort. Its beautiful structure, built by Raja Man Singh in the 16th century, is also home to some underground tunnels that connect Amer to Jaigarh Fort. A part of these tunnels have been restored, and is now open to public as well. It has influences of both Hindu and Muslim architecture. Encompassing all this, the Amer Fort is a perfect example of Rajasthani architecture, which is a must-visit. Buses to Amber Palace leave from Ajmeri Gate and MI Road and take around 40 minutes to reach. You can also hire an autorickshaw or a car from anywhere in Jaipur, which is a more convenient option.

JAISALMER FORT – the Golden Fort of Rajasthan
A place where people still live within the fortress walls. A place of constant sunshine and blue skies. Located in the heart of the Thar Desert is Jaisalmer, a small yet enchanting city. Jaisalmer is also known as India’s ‘golden city’ because many of its buildings are made from yellow sandstone which reflect the sun’s rays. Jaisalmer’s architecture is also stunning, revealing filigree patterns and detailed sandstone carvings. Also known as Sonar Qila, Jaisalmer’s Golden Fort dominates the skyline. The UNESCO World Heritage site is the second oldest fort in Rajasthan. It’s different from the other existing forts in India because people still live within its sun-baked walls. In fact, some families have lived here for generations. It is one of the best places in India to see ‘havelis’. These traditional mansions are made from huge interlocking sandstone blocks. Three of Jaisalmer’s most famous havelis were built during the 19th century by the city’s wealthy merchants. Many hotel and tour operators have capitalised on its natural beauty and offer visitors the chance to go on a camel safari in the desert. The safari can last as little as a few hours to as long as a month. If you’ve never ridden a camel, then you should try an overnight safari with Mystic Jaisalmer. You ride into the desert and sleep under the stars, with the camels resting on a nearby dune. The sound of their bells tinkling softly in the desert breeze will remain with you forever. Jaisalmer is a tiny city. Hence, many of the main attractions are within walking distance. The famous handicrafts that are available in the city are handmade by the locals, mostly using leather as the base material. Other attractive handicrafts include silver jewellery, embroidery on silk and cotton that is weaved by the local women of the village. To witness the glory of Indian history and to experience the streaming adventure visit Jaisalmer and enjoy the magic it has to offer.

JAL MAHAL – Water Palace in the middle of Man Sagar Lake
The beauty of the palace lies in its location, as the palace-cum-hotel is situated in the centre of the lake. The palace architecture boasts of a typical Rajput and Mughal style, which is quite similar to that of Amer Fort. Made in red sandstone, the palace is actually five-storeyed where only the top story is visible (rest are submerged under water). At the top, there is a garden which has semi-octagonal towers in every corner. Although any time is a good time to visit Jal Mahal, it is during the monsoon season (when the water level rises up) when the views from this palatial hotel are really captivating. The beauty of the palace was enhanced by many generations of Maharajas. For example, Maharaja Jai Singh II added to the beauty of the palace by creating gardens to make the Jal Mahal more picturesque. After generations of creativity, we today have the magnificence of the ‘water palace’. Though tourists are not allowed to enter the Jal Mahal, there are couple of exciting things to do there. The Water Palace nestled amidst Nahargarh Hills and submerged in Man Sagar Lake looks beautiful at sunrise and sunset. Near the Mahal, there are many shops selling exquisite handicrafts and jewellery items of Jaipur. You can also find some ‘khadi’ shops . The Jal Mahal is located enroute Jaipur and Amer and is well connected to Jaipur by bus. You can take the Jaipur-Delhi NH 8 to reach the Jal Mahal by road. |SP