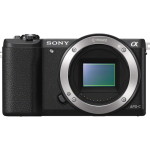 On September 5, 20145, Sony Corp. released a new mirrorless interchangeable lens camera, the Alpha 5100 in Japanese markets. It will be released soon in global markets as well. Sony claims that the camera has the world's smallest ILC with super-fast autofocus and pro-quality pictures. The Alpha 5100 features a fast hybrid AF with 179 focal plane phase-detection AF … END_OF_DOCUMENT_TOKEN_TO_BE_REPLACED