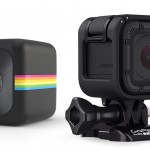 C&A Marketing, promoters of the Polaroid brand, is suing GoPro for patent infringement in its Hero4 Session line of action cameras. C&A claims that the Hero4 Session bears a striking resemblance to its Polaroid Cube line of devices, which were introduced many months before the HERO4 Session was announced. However, GoPro counters this claim by saying that it had … END_OF_DOCUMENT_TOKEN_TO_BE_REPLACED