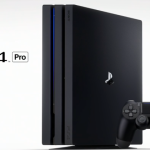 Sony Corp. announced the release of two new models of PlayStation 4. One of which is the 4K image displayable PS4 Pro and the other is a miniaturized PS4, lowering its cost by 5000 yen with a selling price of  29980 yen. The new PS4 is already available in the market while the PS4 Pro will be available in November, 2016 for 44980 yen. The PS4 Pro can display videos and games … END_OF_DOCUMENT_TOKEN_TO_BE_REPLACED