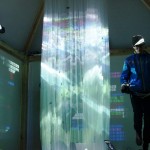 The Story of Light (SOL) Festival, India’s first science-meets-art festival is being held in Panaji, Goa from January 14 – 18, 2015, in partnership with the Corporation of the City of Panjim. The festival has been conceptualized under the aegis of The International Year of Light and Light-based Technologies, 2015 (IYL 2015), a project of the United Nations which aims to raise … END_OF_DOCUMENT_TOKEN_TO_BE_REPLACED