Text and Photographs by Chetan Pardeshi

Chetan Pardeshi is an IT professional successfully running his IT business since the last 15 years. Since the last five years, he has been actively pursuing his love for photography and travel. His photographs have been exhibited in several leading exhibitions across India and have also been published in magazines. Chetan loves to try his hand at different genres of photography. He is very interested in travel and wildlife photography. Besides travelling to new places, he loves to meet new people from various cultures, understand their tradition and try to capture them through his lenses. And of course, Chetan also loves to relish local delicacies!

Theyyam or Kaliyattam is a popular ritual form of worship that originated in North Kerala, predominantly in the Kannur and Kasaragod districts. It’s a living cult with several thousand-year-old traditions that encompass dance, mime and music. It exalts the beliefs of aristocratic Thiyyas, who gave a lot of importance to the worship of heroes and the spirits of their ancestors. It’s often performed in kavus (sacred groves) throughout northern Kerala. 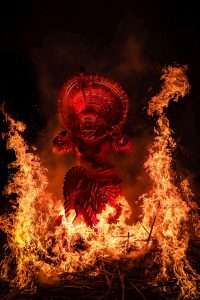 Theyyam season starts from November to April. There are annual rituals at each of the hundreds of kavus. Theyyams are often held to bring good fortune to important events, example, marriages. In peak times (December to February) there should be a Theyyam ritual happening somewhere almost every night in Kannur District.

The ceremonious dance is accompanied by the chorus of such musical instruments as Chenda, Elathalam, Kurumkuzal and Veekku Chenda. There are many separate Theyyams, each with their own music, style and choreography. The most prominent character in Theyyams are Raktha Chamundi, Kari Chamundi, Muchilottu Bhagavathi, Wayanadu Kulaven, Gulikan and Pottan.

Each artist represents a hero with great power. Performers wear heavy make-up and adorn flamboyant costumes. The headgear and ornaments are truly majestic and fill one with a sense of awe and wonder.

Each artist has a distinct costume, made up of face paint, bracelets, breastplates, skirts and garlands. The crafted headdresses can be up to 6 to 7 m tall. The performers of Theyyam belong to a lower caste community. The people of Kannur and Kasaragod districts consider Theyyam as a  channel to a God, and thus, they seek blessings from Theyyam. |SP 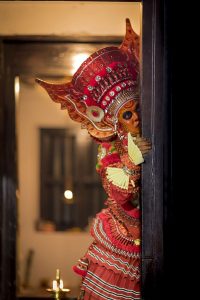 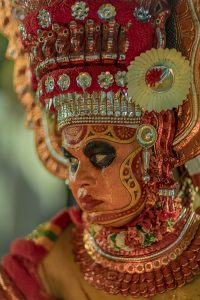